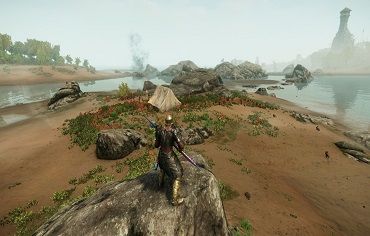 It's 2001 and you've quite recently returned home from school. There are rocks to burrow, chickens to chase, and gold to accumulate. You're seeking cowhides at the ranch outside Lumbridge and mining iron metal southeast of Varrock - it's your beloved crushing course and you can't actually say why. One player has recently fooled you into exchanging your Obby cape for a touch of gold. You're 11 years of age and this is the most noticeably terrible thing that has at any point happened to you. This is RuneScape.

after 20 years, Amazon Game Studios has dispatched a MMO that is practically indistinguishable from RuneScape, yet with a new lick of paint, a superior PvP framework, and significantly seriously subsidizing. New World is essentially only 'RuneScape with the exception of it's not actually RuneScape' - permit me to clarify.

New World ventures profound into the pool of sentimentality and takes out a terribly deformed rendition of games that preceded it. Amazon executives sit in a room and consider: "Along these lines, would could it be that gamers like?" and this is the thing that you get. New World takes the tedious prisons of Oblivion and reproduces them in its barebones Expeditions, the world talk is suggestive of EverQuest's humming in-game socials loaded with helpful weirdos during a named for the time being campout, and the expertise based battle is just about as smooth as Guild Wars 2. In any case, it's RuneScape that hides in the shadows, murmuring "I hax this talk lulz" softly.

As a matter of first importance, there's RuneScape's scandalous drudgery. An interminable, inconsequential, but then in some way thoroughly fulfilling grind. Indeed, even after such a long time, individuals need to crush in practically precisely the same manner they did in RuneScape: For quite a while, and for no genuine explanation. Indeed, even in an advanced multi-million-pound title like New World, the toil stays inconsequential. There never was a point. Never will be. 2001 and 2021? Same thing, mate.

You go through hours evening out your abilities, just to get a hatchet that chops down trees quicker and a pickaxe that drops more pearls. Your Harvesting expertise won't do the washing for you, or get you an advancement at work. So can any anyone explain why 800,000 simultaneous players have signed in consistently since New World's delivery to chop down trees and dig iron metal for quite a long time?

I figure it's really clear. Numbers go up = cheerful. The different experience bars, ability focuses, and slow movement through the many craftable things in New World mean there's continually something you can be doing. Overlook the remainder of the game totally: If you need to go through 45 hours looking for indisputably the superior Pike, you can.

RuneScape was a ton like this, yet New World improves. The breaking of a falling tree or the wonderful plunks of your pickaxe reverberating through the valley like discharges transform the everyday into something substantially more inebriating. Crushing in New World is the best inconsequential thing I've at any point done.

Consolidate this drudgery with the social parts of a MMO like New World and things immediately become less exhausting. Digging for iron in RuneScape was definitely not a singular encounter. I have affectionate recollections of one irregular player simply sending "Pleasant mineral!" each time I wrapped up mining a vein. RuneScape's reality visit was a peculiar spot under the most favorable circumstances, however there was quite often somebody to converse with. The previous evening, chopping down trees in New World, I was drawn nearer by three players from a contradicting group who inquired as to whether they could come cut trees with me. We spent the following a few hours simply moving through the backwoods and talking sometimes. It was serene, kind of dreamlike, and the main spot you should at any point meet outsiders in the forest.

There's something else to it besides that, as well. This year has had a great deal of single-player games during when the vast majority would prefer to be with their buddies. That is to say, one of my cherished games this year was Loop Hero, a singular game that encapsulated lockdown living. That is not to ignore the continuous achievement of Final Fantasy 14 - which has player-run theaters and shows, coincidentally - yet there's plainly a spot for a rising, on the web, social game like New World in the zeitgeist.

For instance, our group shaped around the same time New World came out. There are individuals from everywhere Europe, and everybody hangs out on Discord and plays for quite a long time. Today we put in a couple of hours fishing together. We didn't have a clue about one another last week.

On top of this, it's unmistakable players are frantic for an exemplary MMORPG. Last Fantasy 14 is clearly extraordinary and ESO offers TES fans a heavenly involvement with Tamriel, however New World scratches a tingle of wistfulness that different games simply don't. The missions, the urban areas, the social viewpoints… they're all exceptionally old-school.

All things considered, it requests to an age of players who never knew the miracle of RuneScape on a faintly murmuring CRT and a dial-up association. Why? Since the toil is inevitable. Ageless. Past wistfulness. Wherever you turn there is one more tree to cleave, a turkey to cull, a stone to crush open. You can't help it. It must be finished. Certainly, it could be silly - yet goodness, it will be extraordinary.