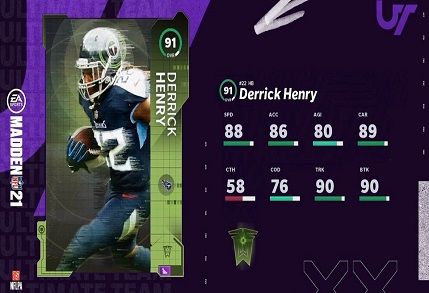 On Instagram, @sparknfl revealed that a GameStop location in Pennsylvania had possibly leaked the cover to Madden NFL 22. A blurry black and white image shows Tennessee Titans running back Derrick Henry from the back. A similar leak last July accurately predicted that Baltimore Ravens QB Lamar Jackson would be the cover star of Madden NFL 21.

In 2016, he was drafted in the second round of the NFL draft by the Titans. Three years later, he led the NFL in rushing yards for the 2019 season, as well as rushing touchdowns, tying with Green Bay Packers running back Aaron Jones. In 2020, Henry once again led the league in rushing yards and touchdown, becoming the eighth player in NFL history to rush for over 2,000 yards in a single season.

Nicknamed King Henry, the 27-year-old player appears to be a likely choice to be the cover star of Madden NFL 22. However, being chosen for the cover is not always a blessing. A number of players who have appeared on the game have experienced a decline in performance or an injury, which has been dubbed the Madden Curse.

The Madden Curse has been given credence by some players, while others dismiss it as superstition. Former Seattle Seahawks running back Shaun Alexander, who appeared on the cover of Madden NFL 07, famously said, "Do you want to be hurt and on the cover, or just hurt?" Meanwhile, Madden NFL 12 cover star Peyton Hillis attributed his less-than-stellar season with the Cleveland Browns that year to the curse.

Former VP of Brand Marketing at EA Sports Chris Erb rejected the idea of a curse, saying “It’s unfortunate. We work so close with these athletes, and we root for them to succeed. What we've been involved with has been coincidence after coincidence. We've just had a string of bad luck." That seems like small consolation for cover stars whose careers go downhill after being chosen to appear on the game.