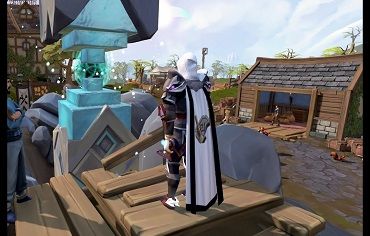 Here, we set out on one last—perhaps even deadly—playthrough of the neglected rounds of our past. Actually like the past times, we may pull some dusk 'til dawn affairs, we may lose a companion or two, we may depend on eating an excessive number of Hot Pockets. How about we perceive how far we've come. Or on the other hand relapsed.

Back in the early aughts, as the overall web lit the gaming scene ablaze with LAN party plausibility, one kind of imagination experience arose: the MMORPG, or Massive Multiplayer Online Role-Playing Game, for you noobs. These were games like World of Warcraft or Guild Wars that let you talk and journey with individuals from everywhere, and all you required was a semi-respectable web association with do it. My own fantastical medication of decision was RuneScape, a game that saw me and my sibling collaborating to kill the Corporeal Beast, figure out how to cook a flawless monkfish, and play a couple of rounds of Gnome Ball. Those long periods of returning home from school and jumping on our common PC, and later our own PCs yet leaving our room entryways open to holler procedures and ask for gold, were probably the best minutes I had growing up.

I've irregularly stayed aware of RuneScape throughout the years to ensure my record from 2005 stayed flawless. In any case, it wasn't until around two months prior, when I got a book from an old buddy in my *Gamer Squad* that basically read, "I need to play runescape," that I began back on my excursion into Gielinor.

Like any great MMO, the target in RuneScape changes definitely from one player to another. Perhaps you need to finish all of the more than 200 missions to cement your Legendary Hero status. Perhaps you need to dominate one of the 28 abilities for the celebrated Skill Mastery cape. Perhaps you need to make billions flipping things at the Grand Exchanges. You could be a poop chute and go kill questing players out in the wild, as well. That is not even to make reference to the small games, world occasions, duels, and occasions. Obviously, the game is large. Furthermore, it's reasonable Jagex has not quit refreshing Gielinor. There's a huge number of new poop, the most recent being RuneScape Mobile, which dispatches June 17.

It was overpowering to get back to RuneScape's Grand Exchange and see individuals wearing covering and employing swords that seemed as though they could tackle god-killing ability to break my old, gold-managed winged serpent shield and deep whip (that'd be noteworthy on the off chance that you played back in my day, youngsters). Indeed, even the menus were unique, however it turns out the caring people at Jagex set up a ton of help for old players, including an inheritance menu mode. In another gesture to old players, I was excited to discover that when I went to Lumbridge and talked with Hans, a famous NPC from the beginning, he could remunerate me with a five-, 10-, or 15-year veteran cape. The 15-year cape is something to view; it has fire consuming the base.

In the wake of being so overpowered, I chose to zero in on a long lasting objective of mine: to dominate firemaking. Ability dominance comprises of a really long time of monotonous movements to accomplish level 99 (presently 120 in a small bunch of abilities), and doing as such acquires you a cape deserving of an expert. This cape is managed. It's splendid. It shows the image of whatever expertise and even accompanies a coordinating with hood. My sibling and an old buddy—who professed to be an amazing mage—likewise participated in the MMO fun, and after re-investigating the RuneScape world (and continually reminding my group over our Discord visit that I was the most grounded among us), the time had come to will work. This team would turn out to be probably the most unbelievable specialists Gielinor had at any point seen, me with my torching, my companion with his sorcery, and my sibling with herblore (elixir making), which he picked on the grounds that the ability cape resembles a weed leaf.

This mission introduced the most loosening up month of the pandemic. Indeed, it was a tedious crush, however RuneScape does such a heavenly occupation at remunerating the granulate that it just felt like me and my companions fooling around on Discord like ordinary, yet with objective setting. Furthermore, obviously, RuneScape isn't without its portions of microtransactions, the haziest part of gaming that MMOs like RuneScape and World of Warcraft everything except developed, however presently, with my grown-up cash, bearing the cost of some participation was not a difficulty, and past enrollment, all the other things—cool beauty care products to scare different players, XP supports, in-game cash—is totally discretionary.

Over the long run, my sibling procured his weed leaf cape, yet not before I acquired my expert firemaking cape. Our companion, be that as it may, has gained almost no headway on his wizardry, as I am as yet a decent 20 levels higher in the obscure expressions than him. In any case, this was only the beginning. We began playing smaller than normal games, questing, chipping away at world occasions... Any reasonable person would agree I'm snared once more, a habit that possibly hopes to deteriorate in the event that I can hold Varrock directly in the palm of my hand. RuneScape's paws dove into the most weak pieces of my cerebrum, reviving that old love to present to me a gigantic measure of solace during quite possibly the most uncomfortable and tension ridden minutes in my day to day existence. So while I might piss away hours navigating Falador and Draynor, the true serenity is more than awesome.

You RuneScape trolls, with your fingers caught with fire invoked by Zamorak the present moment, may be snickering at the fact that it is so natural to accomplish the firemaking cape, or asking why following 15 years this is the main expertise cape I've acquired, yet upon at last accepting my first ability cape after this decade and a half, close by my sibling and companion, I was radiating. There's simply something intrinsically enthusiastic about playing through old games like this once more. Now and then it's dissatisfaction that you can't agree with your more youthful self. Now and then it's a profound otherworldly acknowledgment of how a title helped shape your youth. Now and again it transports you back to when you were an undeniably less experienced player and stresses how far you've come throughout everyday life. With RuneScape it was a smidgen of every one of the three. On the off chance that my more youthful self could see me presently, he'd be so astoundingly pleased. Not even you grotworms can take my light.